A while ago I ran a gallery show of fantasy maps, and through that I met Christopher Merwin – a great guy and a local New York game designer. He was working on a fantasy world for the Pathfinder RPG called Sæmyyr, and asked me to work on up a fantasy world map. See below for the unlabeled map, and some details on how it was made.

The world is incredible detailed, with a rich backstory. Here, many many months later, is the finished product. In the meantime, this world has been the result of a successful Kickstarter campaign and has had some truly beautiful maps created for the cities by Michael Arrington. Check them out on their facebook page.

How the fantasy world was illustrated

This world map was illustrated in a new style for me. The world map covers a huge area – this really is a massive globe. I wanted to reference that scale in this map. The easiest way to do this is to use a different mountain style that emphasizes full ranges over individual peaks (more on how to use mountain styles to define scale here). Also, clearly the forests are solid blocks of dark green at this scale. I used a lot of satellite imagery to get style inspiration for this map.

Here’s the early draft of the map – with colours, major terrain, and deserts blocked in. 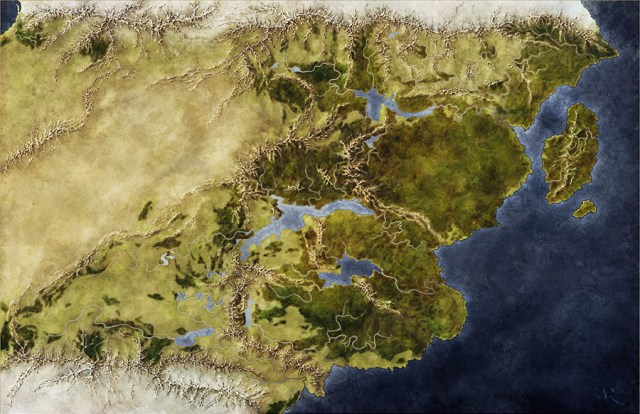 The idea was to go with a hand painted satellite style with enough hand drawn elements to make it clear that it’s not actually a satellite photo. I was inspired by the amazing Dragon Age map but wanted to go a little less saturated than that. I also wanted a distinct style for the mountains – the one feature that really defines the look and feel of a world map. This took a little time, and here’s a quick close up of one of the ranges from start to finish.

You can click the image to see the animation again.

6 thoughts on “Shadowlands – revealed at last”